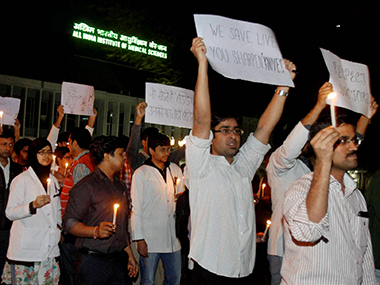 Jaipur: Aiming to break a deadlock, the health department has invited striking resident doctors for talks on Sunday.

“A meeting will be held on situation emerged due to mass leave/strike of in service doctors and to discuss on demands of striking doctors at 2pm,” says, the letter.

However, situation in government hospitals is turning from bad to worse as the state government and striking doctors have not broken the deadlock. Now, intern medical students’ are giving up their patience as they have to prepare for National entrance eligibility test (NEET) post-graduation.

Besides, Rajasthan Medical College Teachers Association (RMCTA) will hold its executive meeting on Sunday. They will take a call on how they should react to the situation. They have already threatened to agitate in support of the striking doctors. They had tried to mediate with the government and striking doctors but their efforts went in vain. “What action we will take, we will decide in our executive committee on Sunday,” said Dr SS Yadav president RMCTA.

But, MBBS student who are doing internship in government medical colleges across the state are facing tough time as they have to prepare for NEET PG but they are

“We have to appear in NEET post-graduation is scheduled for on January. During doctors’ strike, the medical college administration is assigning duties from 12 to 16 hours in a stretch. In such a situation, how we will prepare for NEET PG,” said, an intern student from Bikaner medical college.