Kolkata, 24th December 2020: The first episode of DocTalks premiered on 23rd December 2020 and had as guest Dr. Dilip Kumar who is a Senior Consultant Interventional Cardiologist and Electrophysiologist at Medica Superspecialty Hospital.

The veteran doctor discussed about the ‘New Developments in Pacemaker Therapy’ with host Sandhya Sutodia of Turiya Communications LLP.

As an initiative to make health information accessible to everyone, online pharmacy and digital platform of healthcare SastaSundar became health partner of health-centric web show DocTalks with Turiya Talks.

“Pacemakers do not affect the lifestyle of a person; they can still lead a normal life. This is otherwise one of the most common perceptions that people have about pacemakers,” said the doctor. He elaborated on the new development in pacemaker therapy which involves physiological pacing. He also put forward the fact that today in the history of cardiology, pacemakers are one of the revolutionary developments. It involves implantable pacemakers which set the pace of the heartbeat when the endogenous rate drops excessively. Conduction system pacing is a promising method for delivering pacing therapy for heart failure.

Dr. Kumar also provided insights about how pacemaker works after implantation and also answered the different doubts involving magnets and travelling with pacemaker. He explained that the heart has four chambers, two upper chamber and two lower chambers and that today mostly DDDR is used (dual-chamber rate-modulated mode). The doctor also reassured the viewers that pacemakers do not usually fail and the rare reasons why it fails. With pacemakers, while the healing process of people with diabetes can be longer, but there is no problem with high blood pressure.

As a concluding note, Dr. Kumar added that in the current scenario, people should contribute to healthcare and give importance to personal health in whatever way they can. He also said that in this present pandemic situation, people should not panic if they have a cardiac issue because many facilities are available.

The public prospect towards admini... 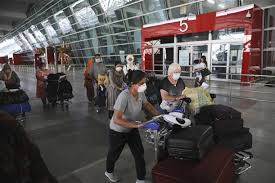 Delhi airport has a storage ca...