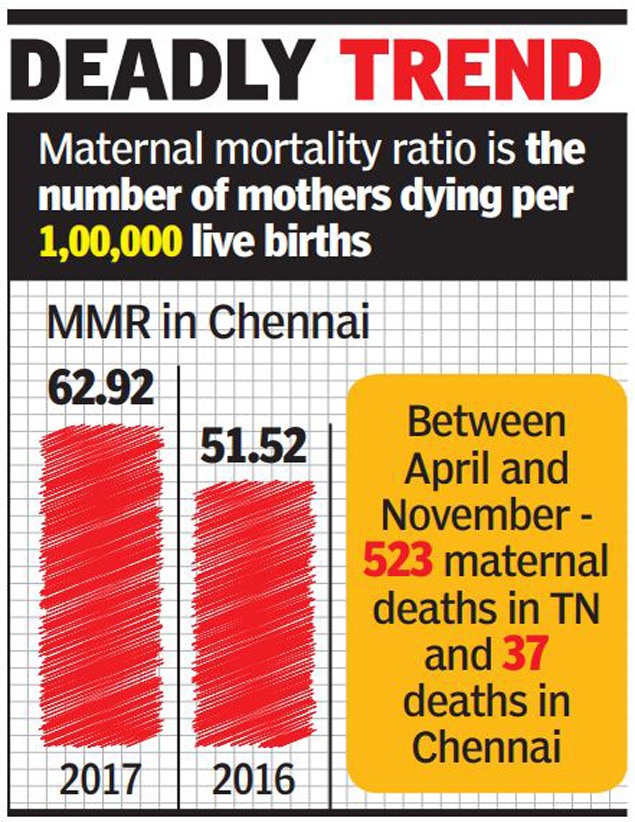 Maternal mortality rate up 80% in Chennai

Maternal mortality ratio (MMR), or the number of mothers dying per 100,000 live births, in the city has increased by nearly 80% in the past five years.

CHENNAI: The number of women dying in connection with labour in Chennai has gone up, while such deaths are on the decline across the country.

Maternal mortality ratio (MMR), or the number of mothers dying per 100,000 live births, in the city has increased by nearly 80% in the past five years. In 2017, Greater Chennai Corporation recorded an MMR of 62.92 compared to 51.52 in 2016, state health department statistics show. The percentage of increase in mortality rate was higher in private hospitals than government hospitals.

This goes against the national average: In 2015, there were 174 deaths per 1 lakh live births against 215 deaths per 1 lakh births in 2010. “Chennai’s higher MMR is a big concern,” said director of public health Dr K Kolandaswamy. “Increase in maternal and infant deaths will lead to decline in overall health indices.”

Heart diseases, disorders associated with high blood pressure and sepsis have been the top three contributers to these maternal deaths, the state-wing of the National Health Mission found during a maternal death audit on Friday. The state too recorded a 19% increase in MMR in five years and 33% increase in over last year. Between April and November this year there were 523 maternal deaths in the state, including 37 in the city. Dr Kolandaswamy said it may not be accurate to attribute the increased MMR to medical negligence. “Risk factors may be up. Low awareness could also be a reason,” he said.

Gynaecologists are scrambling for reasons. “So far we were worried about anaemia and hypertension in pregnant women. Now we have to look at why there is an increase in death due to heart diseases too,” said Dr N Palaniappan, who heads the Safe Motherhood Committee for Federation of Obstetric and Gynecological Societies of India.

For long, Chennai has been boasting that only 2% of its women belong to a high risk group called higher order births (have delivered at least twice earlier), but latest statistics show that at least 33% of maternal mortality cases were from this group.

The maternal death audit by the state wing of the National Health Mission for Chennai corporation areas on Friday showed that the maternal mortality ratio (number of mothers dying per 100,000 live births) in the city in 2017 was 62.92 compared to 51.52 in 2016.

A senior public health official, who was a part of the review, said the impact is huge. “We also found that although only 5% of the women are more than 30 years of age, 36% of deaths happened in this age group,” he said. While it may not be easy to prevent older women from giving birth, increased awareness and better family planning will help,” he said.

Studies have shown there is a decline in low-birth weight, pre-term births and birth defects across the state since 1990, but more than half the women in the reproductive age group still have iron-deficiency anaemia. Deficiency is the fifth leading cause for death and disability across genders and one of the major risk factors for maternal mortality. Senior gynaecologists point out that anaemia with hypertension or diabetes can increase risk by several times.

Another cause for concern is the increase in number of deaths in transit. Nearly nine years ago, when the state outsourced ambulance services, it wanted to reduce the number of deliveries outside hospitals. As a result, the proportion of institutional deliveries in the state increased from 76% in 2008 to more than 95% in 2017, and in the process ambulances which ferried thousands of women in labour delivered more than 25,000 of them with no maternal or infant death. “Most deaths happened because they took private vehicles to transfer patients from home or between hospitals,” the official added. (TNN)