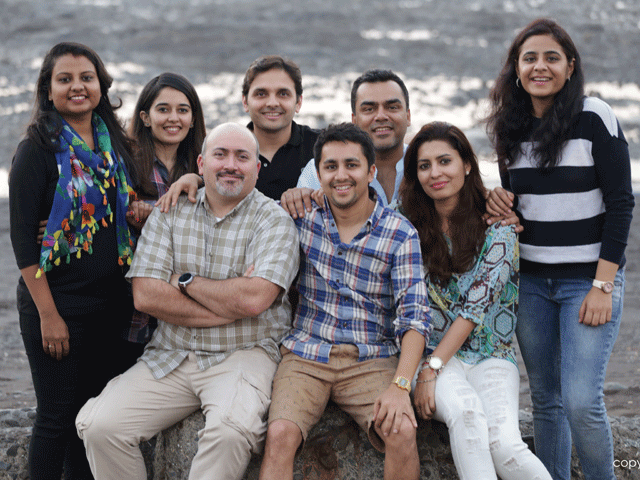 Early detection being the key to saving breast cancer patients from death, founders of UE LifeSciences created a handheld, mobile connected device to provide women with increased chances of survival

Breast cancer is on a rise across the world, but India is experiencing an unprecedented rise in numbers. Although, there has been an upsurge in the awareness campaigns, the impact on ground has been negligible. Considering that early detection is the key to successful treatment in the majority of the cases, it is appalling to witness the absence of a healthcare system to address this ever-widening chasm.

The horrific statistics and the dismal response to it motivated the founders of UE LifeSciences to design a solution. After close to three years of endeavour, the startup received FDA approval to launch iBreastExam – a handheld, mobile connected and completely wireless device which can detect tumour tissues as small as 3-5 mm while emitting no harmful radiation.

“We’ve been able to bring breast health check-up to over 75,000 women by now and have commercial collaborations to reach at least 500,000 women. Our work has resulted in over 100 breast cancers being detected and those women to receive treatment early,” says UE LifeSciences, cofounder, Mihir Shah.

No pain, no radiation
Easily operable by community health workers, iBreastExam incorporates an innovative tactile sensor technology originally invented at Drexel University in Philadelphia. The specialised ceramic material, which is protected by multiple patents, enables the device to assess tissue elasticity from the surface of the breast.

“The cancer tissue is harder than the normal breast tissue and the ceramic sensors are able to feel out the harder tissue without causing any pain and using any harmful radiation. The entire test takes about 5 minutes and is designed for local community healthcare operatives. With the help of iBreastExam we have been able to convert these community health workers into expert breast examiners,” says Shah.

The company has since then expanded its reach to over 100 users of iBreastExam across 4 countries. The magnitude of the problem is only increasing and according to the Indian Council of Medical Research (ICMR) is expected to reach dizzying numbers. ICMR predicts that India is likely to have more than 17.3 lakh new cases of cancer and over 8.8 lakh deaths caused by breast cancer by 2020.

The need of the hour is to leverage the strength of all possible stakeholders to expand the reach and this is what Shah says the company is currently engaged in.

Joining hands to expand reach
UE LifeSciences is increasingly getting into partnership-based distribution model to sell the device in order to reach more number of women in as short a time as possible. The company recently announced a partnership with GE Healthcare and is also in talks with several state governments to take advantage of the chain of government healthcare workers.

“GE Healthcare will be selling the product for us across 25 plus countries. Apart from GE, we have other distribution partners as well in countries like Mexico, Myanmar, and Botswana. These partners will be responsible for sales, marketing, distribution as well as servicing of the product while we concentrate on product development and manufacturing,” shares Shah. The partnership is under a part of GE Healthcare’s accelerator five.eight program.

While one iBreastExam device is available in the market for anywhere between $8000-10000, Shah says the company has worked out a way to offer tests by iBreastExam for as low as $1 per scan. “This is for those programmes which have very high volume; specifically for government, NGOs, and CSR initiatives,” says Shah.

The company has entered into tie-ups with several state governments – Maharashtra, J&K, and Rajasthan – to make iBreastExam available to more women.

“Every woman above age 30 should have access to routine breast health examination to ensure that breast cancer gets detected early. In India there are approximately 190 million women who can be benefitted with iBreastExam with the help of both public and private healthcare providers,” says Shah.

Challenging ecosystem
An innovative solution to a dangerously compounding problem it may be, but the company has faced multiple challenges while negotiating its way in the healthcare as well as the business ecosystem.

Apart from securing intellectual property protection to receiving tough regulatory approvals such as US FDA and CE Mark and the first clinical validation study, Shah says the most problematic challenge has been to ensure operating capital for the company’s Indian subsidiary. It was challenging not because of the shortage of capital, but due to restrictive laws keeping that capital out of India.

“While we are adequately capitalised; it remains challenging for us to bring operating capital from USA to India. It is not allowed for a US company to loan capital to its subsidiary in India. Investors invest in the parent company and not in subsidiaries and while we can easily wire money to our Malaysian subsidiary in a matter of minutes it is next to impossible to route that for Indian operations. Paperwork and regulations in India are tremendous and the country is losing because of that,” complains Shah.

The restrictive rules and regulations, insists Shah, has forced India to become limited to being a mere service provider. “The money raised from investors in the US or Singapore never enters India. If tomorrow my company sells for a high valuation, that sale will also happen outside of India. It means that India will not benefit at all from the journey of this startup,” adds Shah.

However, since India was the first market for UE LifeSciences and is also a country with one of the highest incidences of breast cancer, the company had to find ways to traverse around the regulations in order to provide the necessary capital. The company is also working on setting up a technology transfer agreement between the parent company and the Indian subsidiary. This will enable the Indian company to get additional revenue in return for manufacturing devices for other subsidiaries.

“Also, our Indian subsidiary has been able to do its own sales and generate its own revenues, which has largely helped us out,” says Shah.

Bal Doctors to ‘treat’ children at...